In mid-March, my Sister-in-law and her seven kids drove up from Texas to Spend some time with my parents. Since MrE and I still haven’t found acceptable housing that is even moderately affordable, we too are in the same house and it’s been crazy! But only in the best way.

The kids are all very creative and are always playing, imagining, and making up stories to entertain themselves. I was drawing in my sketchbook, which of course made the kids want to color in it for themselves. Since I’m kid of protective with my sketchbook, I decided to make some coloring pages so they could request something special and color at the same time.

E’ry-body loves a dragon, which was what my nephew Rustin requested.I think it’s a baby dragon which is why the head to body ratio is so strange. I also attached the scanned images of the completed coloring pages. If you are wondering why there are so many nieces and nephews, check out Wilkinson Quints, to see the story of my bother and sister-in-law on their quintuplet journey.

Your giant dragon head is fierce!

The kids’ dragons accidentally got a bit wet, that’s why there is a bit of purple splotches on Kaydence’s.

As if I weren’t fascinating enough…ha!…I also am the president and founder of Megan’s Unicorn Club est 1995. In a nutshell, this means that I think and have always though unicorns are the most awesome of all creatures. Club members must report all unicorn sightings, bring plenty of paper and pencils to club meetings (of which there hasn’t been one, yet), and do everything I tell them to do. Club members must also memorize the club slogan: They are magic, they can fly!

My nieces were disappointed that I used a horse as reference for the unicorn, rather than a real unicorn, but they got over it pretty quick. 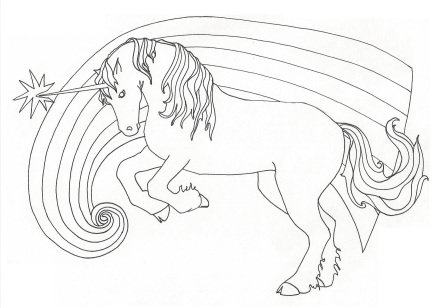 They are Magic, They can Fly!

I would love it if people wanted to print off the blank coloring pages to complete them, then send a photo of them my way! And if you think you may be too old to color, don’t be ridiculous!

One thought on “Nieces, Nephews, and Coloring Pages”

Rain and fronds and no outlines.